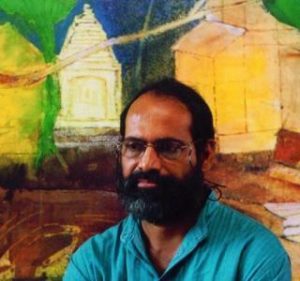 When I entered the college Prof. Ramlal Dhar was the first teacher I met. He taught us for two years.
Students used to know him as a very strict person. But he has a true heart of an artist. He cant hide his emotion. He was a person who can express his unlikeliness without hiding it and can show his happiness like a child also. People find him a little unpredictable sometimes.
His ironic discipline pulled the best out of us. What we were really needed at the early stage of learning is technical things. He always
told us to focus on detailing and perfection.  Sometimes it was painful but it made our base stronger. It was hard to satisfy him.
A very few of us experienced a real soft part of him. I was again happy to be one of them. It was his care and affection that encouraged me. I remember all the nice time we had with him. In those two years whatever he taught me will be with me for lifetime.
He was a scholar and traveled around the world. It was a real pleasure to learn from a person like him. He was conscious about his success but never liked anyone to lower their head in front of him. May be this is the reason why he never liked the ritual of touching feet( Indians do it to show respect). He has to say ” you don’t need to touch my feet to show me respect, respect comes with the behaviour”. An unique person, an unique teacher, an unique soul. I miss him a lot. It is a upsetting news that he  passed away on 14 July 2010 late evening rfter suffering long time form Cancer. It is so very depressing  that I will not  hear his voice again, as he always did …..” Dipanwita, what are you up to ?”  What a pity!

1983 Be Biennale of Mediterranean (France)

Numerous Exhibitions in India and Abroad.

Frescoes and Murals on the premises of the Govt. College of Art & Culture, Calcutta Mosaic for the entry hall of the post & telegraphs; building on avenue de la californie Nice. Mural paintings for Centre des Oeuvres Universitaires et Scolaires, IS Avenue des Fleurs, in Nice.

One Response to “ A very strict teacher by heart: Prof. Ramlal Dhor ”